The ‘speaker grill’ of RDO_002 could not be included in the vacuum formed shell since it is a series of undercuts. Therefore a separate piece was built on the FDM and needed to be ‘scabbed in’ afterward. We could just have glued it in place and filled any gaps with body filler but this tends to shrink and crack with age and abuse. So I used my ‘dissolved ABS shavings’ method (mentioned previously). 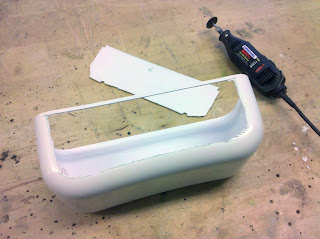 The part to be inserted was traced around and cut out. I do straight sections with a scalpel and whittle away at curves with a rotary cutting tool. The edges of the hole are cleaned up with a (high quality) file. 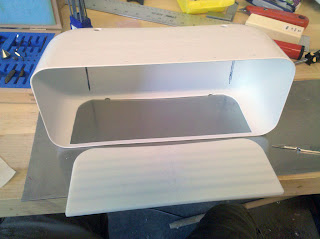 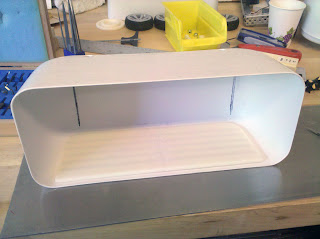 The part to be inserted was held in place (on the show surface) with masking tape and both parts were fixed in place on a sheet of Aluminum. 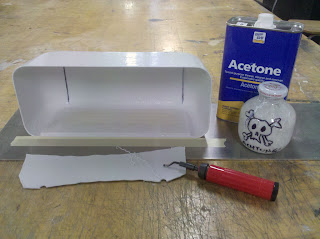 I made some shavings from the off cut of ABS plastic (with a deburring tool – the thing with a red handle in the picture) and dissolved them in Acetone (in a glass, ex-apple juice bottle). The Acetone/ABS slurry was painted onto the joint making sure to overlap both pieces. It bites right into both parts and makes the whole thing as one. The melted area stays ‘chewy’ for a while – so it was left overnight to set up. 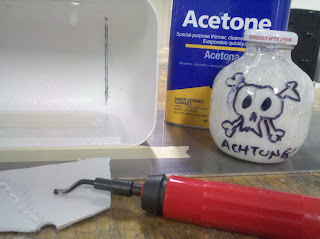 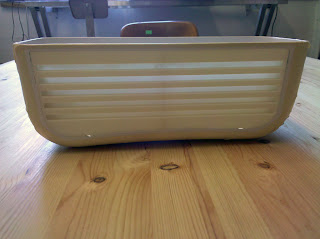 The parts were now fused but the joint line was still visible with a small gap. 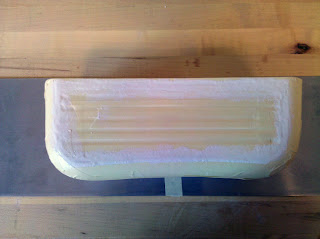 Most of the show surface was covered with masking tape leaving a small exposed area either side of the joint line. This was painted with more Acetone/ABS slurry. As the slurry was getting ‘chewy’ it was trimmed and the masking tape removed to prevent it getting stuck under the fused ABS. 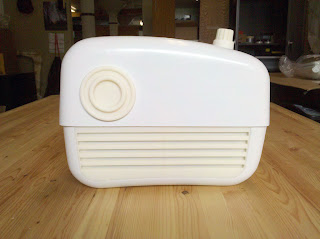 Again it was left overnight to set up. After some sanding, RDO_002 now has a ‘speaker grill’ that won’t shrink or crack or pop out if too much flex is applied to the shell. 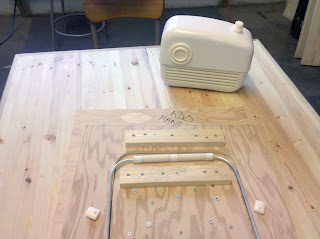 I also made the handle for RDO_002 while waiting for Acetone/ABS slurry to set up.

TST_003 now has a linear servo for the toast cycle and the chassis was adjusted to be lighter.