TBD (To Be Designed)

The catalog of the near future’s normal ordinary everyday

‘To Be Designed’ was intended to establish the relevance of Design Fiction as a practice that can re-imagine what is possible.

The workshop and catalog aimed to rethink the rules by which design, technology and storytelling can come together in a new way that reinvigorates the imagination by melding pragmatic creativity, speculation, and problem-solving.

TBD started out as a modest effort to assess the future of products, their design, and associated services as society evolved with its exuberance for cultures, businesses, and daily rituals in which technologies and sciences played a central, defining role.

In 2012, we got a call from our Near Future Laboratory colleague Julian Bleecker. Julian wanted to put together a meeting of sorts for science fiction writers, designers, artists, cultural theorists, engineers, and makers.

In typical Julian manner, he said “It’ll be a thing. I think.” Julian wanted to bring together these folx to come up with “A SkyMall Catalog from the near future” as a means of exploring and criticizing potential futures by creating possible, but not necessarily preferable scenarios revealed through the means of designed artifacts. He was looking for somewhere “between Europe and California, that wasn’t New York.” He wanted to know if we could make it happen in Detroit. We rolled up our sleeves and got to work on it.

In October 2012, we set up our temporary studio at the University of Michigan’s Detroit Center and spent three days with a small group of invited designers, writers, curators, journalists, and technologists for a broad discussion about shifts going on in the world of making, manufacturing, design, and innovation. The workshop was generously supported by Penny W. Stamps School of Art & Design at University of Michigan, and we also spent time in the archives of the Henry Ford Museum looking at the history of innovation. We spent our time discussing, pitching, voting, revising, designing, reviewing, and laying out until we had a rough draft of a catalog. Christian Svanes Kolding filmed the entire thing and did talking-head interviews with us all.

Having established the methodology, tone, and template for the catalog everyone returned home. Over the next 2 years, the results of the ideas from the initial brainstorm were refined and many more added. Finally, the catalog was finished and published. The irony was, that in the time it took to fully develop the catalog, several of the things we had imagined were released as commercial products, and SkyMall, LLC filed for Chapter 11 bankruptcy protection in January 2015.

Just as Julian Bleecker thought, “Design Fiction” has become a thing. There was even a research group at the MIT Media Lab on it from 2013 to 2017. N.B. The term was originally coined by Bruce Sterling in his book Shaping Things (p.30): “I’ve been writing “design fiction” for years now. Design fiction reads a great deal like science fiction; in fact, it would never occur to a normal reader to separate the two. The core distinction is that design fiction makes more sense on the page than science fiction does. Science fiction wants to invoke the grandeur and credibility of science for its own hand-waving hocus-pocus, but design fiction can be more practical, more hands-on. It sacrifices some sense of the miraculous, but it moves much closer to the glowing heat of technosocial conflict.”

TBD, A Catalog for your Normal Ordinary Everyday Near Future from Near Future Laboratory on Vimeo. 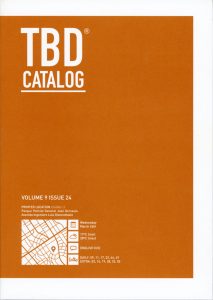 Core 77 The Future Is Here (Sort Of): The TBD Catalog Is Available Now