Its been a funny kind of a year…

TL:DR – We did some stuff. More than usual.

The Whithervanes were rebuilt for the long haul in fiberglass and stainless steel. They went back on site in June. Hannah Conroy of Folkestone Artworks took some pictures:

We received a matching award from the 2014 Detroit Knight Arts Challenge to explore how fear is used in contemporary media. The goal is to expand the “Whithervanes” project to create an open-source toolkit and provide workshops to help others create their own sculptures to visualize and humanize additional data and information flows.

Locust Projects in Miami, Florida and FACT (Foundation for Art and Creative Technology) in Liverpool, UK are currently fundraising to commission sets of “Whithervanes” for their own cities.

HASTAC is an alliance of humanists, artists, social scientists, scientists and technologists working together to transform the future of learning for the 21st century. Since 2002, HASTAC (“haystack”) has served as a community of connection where 11,500+ members share news, tools, research, insights, and projects to promote engaged learning for a global society. HASTAC 2015 was held May 27-30, 2015 at the Kellogg Center on the campus of Michigan State University. We were keynotes.

We had our RBTS on hand:

TBD, A Catalog For Your (Normal Ordinary Everyday) Near Future from svanes on Vimeo.

“This video tells the story of the making of TBD Catalog. The Catalog started out as a modest effort by a workshop in Detroit, USA to discuss what was jokingly referred to as the “State of Things” and to assess the future of products, their design and associated services as society evolved with its exuberance for cultures, businesses and daily rituals in which technologies and sciences played a central, defining role.

To address this, we started by posing provocative questions to ourselves. How might the promise of what at the time was called an “internet of things” play out in the near future? What would the future look like in a world blanketed by advances in protection and surveillance technologies? If Autonomous Vehicle innovations continued its passionate race forward, what would it be to pick up the groceries, take a commercial airline flight, commute to work, have mail and parcels delivered, drop off the dry cleaning, meet friends at a bar across town, go on cross-country family vacations, or take the kids to sports practice or school?

Our design brief was to ask these questions and then represent the answers as design fictional services, evolutions of product categories and new kinds of social, domestic and retail experiences.

The result took the form of a catalog of the near future’s normal ordinary everyday. TBD Catalog is a design fiction that makes implications without making predictions. It sparks conversations about the near future. It serves to design-develop prototypes and shape embryonic concepts in order to discard them, make them better, reconsider what we may take for granted.”

rootoftwo were one of ten regional design studios nominated by an advisory council and then selected according to a criteria that included material use, functionality, impact and potential international significance of work for the DETROIT MADE exhibition at College of Creative Studies, A. Alfred Taubman Center for Design Education during the Detroit Design Festival and at DDF Design Village @ DLECTRICITY. We showed our RBTS. The selected studios were: The Smith Shop; Detroit Wallpaper Co.; Cyberoptix Tie Lab; Carhartt; The Floyd Leg; rootoftwo, LLC; Ali Sandifer; Mobel Link; Sundberg Ferar; and Shinola.

We formed r+d LAB, LLC as a research-led collaborative entity to remix models of practice including laboratory, workshop, think-tank, garage, studio, and agency that lead to innovative approaches, designs and environments. r+d LAB grows out of a meshing of rootoftwo + daub-lab.

r+d LAB presented Rules of the Road at Liberty Annex, Ann Arbor as part of the Research on the City exhibition series.

Transportation infrastructure such as waterways, Roman roads, railroads or the federal highways have always informed the design of cities. The National Interstate and Defense Highways Act of 1956 forever changed transportation, economic flows, connectivity and the landscape of the US. The mechanical efficiency required for the success of the freeway is created through separation from everything that might slow it down, but unfortunately the benefits of speed created by separation are constantly at odds with the slower, finer-grained, human concerns of dense urban cores.

Chicago is a unique city to consider regional and local connectivity given the history of commerce and the transportation of goods into, around, and out of the city. Many designers have considered the forces, forms, and implications of the freeway with wholesale utopian visions of buildings and roads merging into mega-infrastructural proposals such as Chambliss’s 1910 “Roadtown” or Jellicoe’s 1961 Motopia. Rather than negate the rich existing conditions of Chicago and its infrastructure, Rules of the Road engages the Federal, parametric, Fordist logic of the freeway with the requirements of a post-Fordist city and proposes urban design strategies that mitigate environmental, social, and formal concerns with an architecture that engages underutilized freeway infrastructure zones.

We did some other stuff too. Cezanne completed a Masters degree at the Gerald R. Ford School of Public Policy at the University of Michigan; John got tenure (see talk below) and promotion at the Stamps School of Art and Design and promotion at the Taubman College of Architecture and Urban Planning at University of Michigan; and John became the first Program Director of the new Master of Design in Integrative Design at the Stamps School.

menotme is a luminous, playful, responsive form activated by squeezing which causes it to purr, giggle, and burp and is designed to provoke public affection as a defense against post‑industrial anxiety. menotme is an urban comfort object; part street toy, part environment. For DLECTRICITY, rootoftwo + daub have created menotme to inspire new types of social behavior, interaction and play. Participation is essential. The more you interact with it, the more it will perform. Organic in form and feel, menotme creates a comfy place to dawdle during the festival where informal social exchanges and a good cuddle with the work are encouraged. rootoftwo + daub are interested in transforming the urban environment in ways that increase socialization and pleasure.

Electronic schematic. We are using these, these and lots of these.

Testing the LEDs with the Powermesh skin.

First ring test in the studio (tennis ball for scale).

DLECTRICITY is a free nighttime, outdoor contemporary art festival which will invite emerging and established artists, lighting designers, performers and architects to make site-specific installations of light, sound, performance and projection – transforming the Woodward corridor into an illuminated urban spectacle for thousands of visitors. 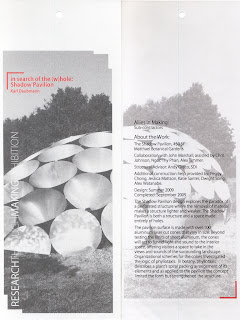 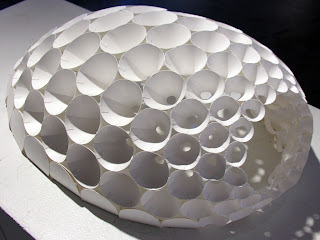 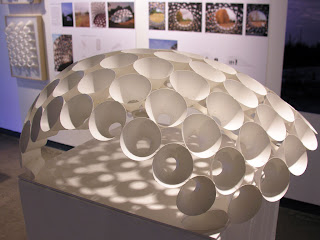 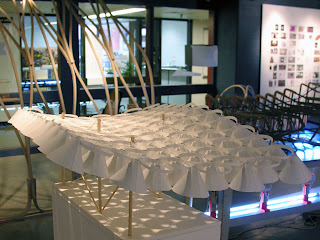 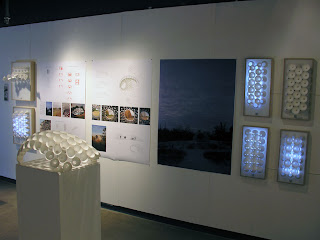 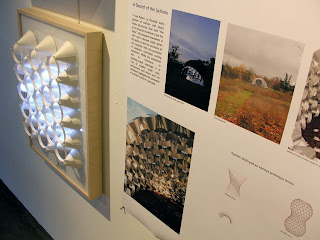 “Shadow Pavilion is a temporary experimental installation by University of Michigan Taubman College professor Karl Daubmann in collaboration with John Marshall. The project is an extension from a graduate studio course. It utilizes computer-generated architectural forms inspired by organic models to design site-specific structures that maximize utility while minimizing material and waste. This botanical-inspired structure was designed for this overlook on the Sam Graham Trees Trail. It frames the vista for visitors while providing both shade and a visual destination that orients people to the view point.”

“Construction was assisted by graduate students Ngoc Thy Phan and Alex Timmer with construction volunteers Craig Borum, Peggy Chong, Jen Maigret, Jessica Mattson, Katie Santer, Dwight Song and Alex Watanabe. This project was made possible by a Research-through-Making grant from Taubman College at the University of Michigan and the U-M Matthaei Botanical Gardens and Nichols Arboretum.” 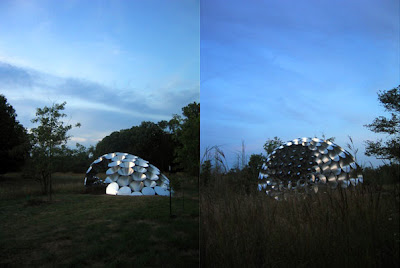 Major elements of the Shadow Pavilion completed (designed for a site at the University of Michigan Matthaei Botanical Garden). Minor tweaking still required. 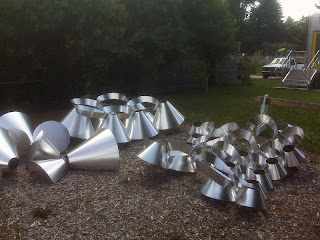 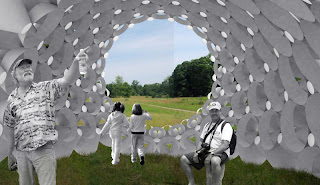 The Shadow Pavilion explores the paradox of cutting holes in a structure because the removal of material makes a structure weaker but also lighter. The Shadow Pavilion, designed for a site at the University of Michigan Matthaei Botanical Garden, is both a structure and a space made entirely of holes. The pavilion surface is made with almost 100 aluminum cones that vary in size. Beyond testing the limits of sheet aluminum, the cones will act to funnel light and sound to the interior space, offering visitors a space to take in the views and sounds of the surrounding landscape.

This project was made possible by a Research-through-Making grant from Taubman College of Architecture and Urban Planning at the University of Michigan. 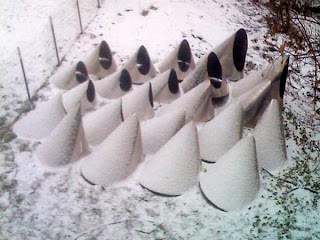 ‘Fire’ is no more. There was some will for it to become permanent. However, this was not to be. On reflection, mounting subwoofers on the underside of the office of the building’s namesake was unlikely to result in permanence. Karl has installed the ‘cones’ in his backyard. He’s calling this piece ‘Ice’.

Fire Getting Some Attention 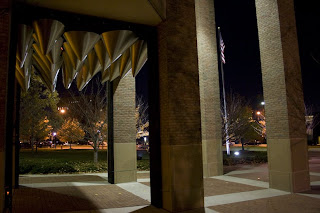 The ‘Fire’ project was featured in the gallery at the Behance Network site. 666 people have viewed it since yesterday. We have been asked to keep it on site until February and there is talk of making it permanent. We have no idea what the impact of the Michigan weather will be on it. It was never intended to be there that long. So far it has survived the rain and snow…

‘Fire’ from John Marshall on Vimeo. 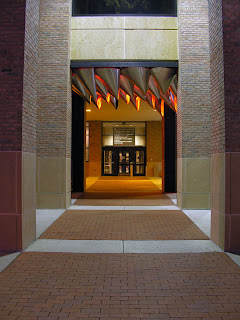 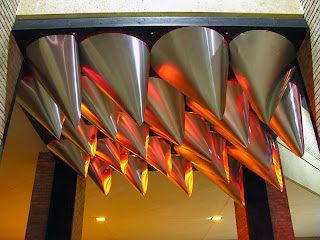 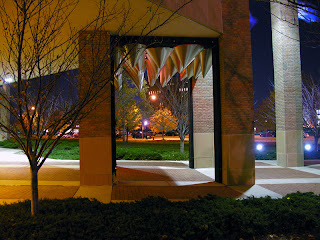 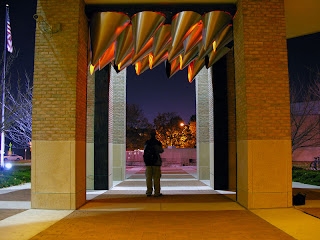 The ‘Fire‘ project is going well. It survived the rain. Apparently there is some will to make it permanent. There are some great photos of it on Earl Carlson’s site. 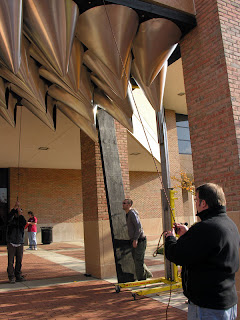 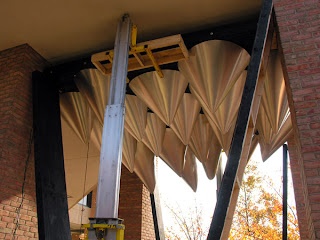 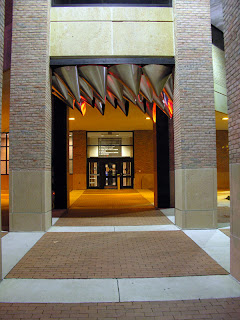 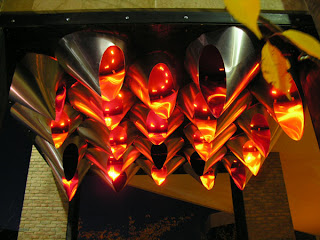 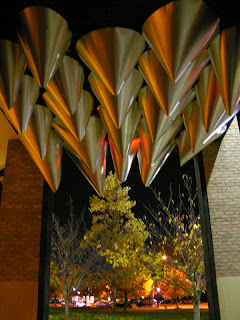 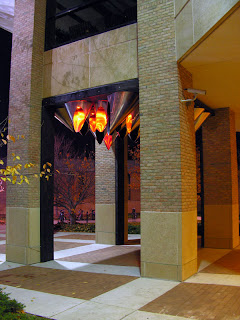 The ‘Fire’ project is in place and functioning.